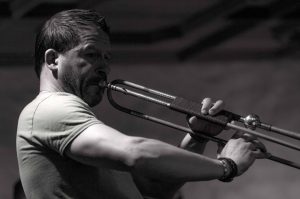 Dave studied at the Royal Northern College of Music and the Royal College of Music. It was at the RNCM that he developed an interest in Baroque music, Early Brass and specifically the Natural Trumpet. Since graduating in 1990 after studying with David Staff and Michael Laird he has spent most of his career performing with Period performance ensembles in the UK and Europe. He is presently Principal Trumpet of the Gabrielli Consort and Players / Paul McCreesh (UK); Amsterdam Baroque Orchestra / Ton Koopman (Holland); and Les Talens Lyriques / Christophe Rousset (France).

Dave has also used Natural trumpet when performing with modern ensembles such as the Chamber Orchestra of Europe, Ulster Orchestra, Bremen Kammerphilarmonie and the Orchestra of the Royal Opera House, Covent Garden. He has toured extensively throughout Europe as well as North and South America, Scandinavia and the Far East.